When I decided to take the plunge and invest in my first snowboard (you can read my Bataleon Omni 155 review here) after learning on some fairly shonky Bulgarian rental equipment, my next job was to hunt out some decent bindings to attach myself to the new board! I started online mainly on ebay to see what could be snapped up on a moderate budget, but I also supplemented my research with a quick online review check, probably as you are doing right now!

Even though I was still relatively new to snowboarding, there were lots of bindings available from brands that I had heard of before such as your Burtons and Salomons etc. However, there was one set of bindings which particularly caught my eye from a brand called K2 that I wasn’t quite so familiar with, but after a quick bit of research they sounded promising, so I clicked that magical buy it now button and a few days later had my first ever set of snowboard bindings, the K2 Formula. 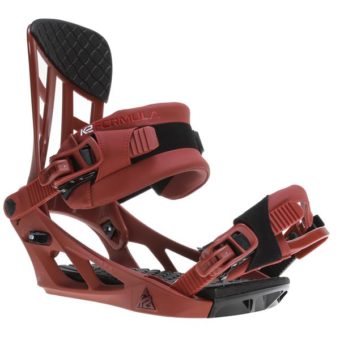 The K2 Formula snowboard bindings were described by the manufacturer as suitable for intermediate riders looking for a responsive binding suitable for a stiffer snowboard and designed for carving and freeriding, so this seemed to match up with most of my requirements and also my Bataleon Omni snowboard. I have to admit that I was also pretty attracted to the design and colour of the bindings which made for a pretty sweet set-up on my new Omni board.

I took to the indoor snow slope at the Snozone in Milton Keynes for my first shakedown on this new set-up and my first impressions were very good, the straps on the bindings felt so good compared to the rotten old rental crap I was used to, that sweet and reassuring click as the strap slid smoothly through the retaining buckle was a little bit magical!

I set my bindings to my preferred +15 degrees front and 0 degrees back and headed off on my first run, instantly the bindings gave me a really good connection with the board and in combination with my new boots (see my Thirty Two Chris Bradshaw snowboard boots review here) I felt like I had excellent control over the board. The only thing I would say about using this combination of stiff snowboard, binding and boots is that when you’re a beginner, sometimes it can be a bit harder to initiate the turns and you can occasionally get caught out by the stiffness as they can be a bit unforgiving if you get it wrong.

Features of the K2 Formula bindings

The K2 Formula snowboard bindings have some great features including a canted footbed, which seemed to fit the shape of my large size 11 boots really well, and the standard highbacks offer really impressive support, even when carving at high speed out on the real mountain, as I found out in my third season in the French alps! The highback position is adjustable and it took a bit of tweaking to get the starting position matched to my boots, but since then I have never touched them. The bindings have a really easy system for mounting to the snowboard and adjusting the angle, simply lift up the flap on the footbed and rotate the mountain plate to the desired angle and attach to the board with 4 screws, which come pre-installed with Loctite to keep them secure.

After 3 seasons I’m still using the K2 Formula bindings and I really love them, I never really make any adjustments, they work well with both of my board, the Bataleon Omni 155 and the YES Typo 158, they are diverse enough to handle pretty much everything you throw at them from the piste to the park, the only slight negative I can report is that they have left some wear marks on the board, but I think this would be the case with just about any bindings, so that aside I would give these bindings an impressive 9/10 score! Hope you enjoyed the K2 Formula snowboard bindings review, please share and if you’re interested in purchasing these bindings then click the button below.