This week I had a few meetings in different locations around the country which involved doing about 500 miles in 3 days on a huge variety of rads including motorways, central London, outer city, country B-roads etc. Rather than sit in hours of queues in a car or subject myself to a train packed full of sweaty commuters i thought i’d enjoy the last of the late British summertime weather (yes it was actually dry and reasonably warm for October!) and take on the journey by bike.

As luck would have it i woke up bright and early on the first of my busy few days to glorious sunshine, so i rolled the bike out of the garage, well actually i was on a Suzuki Burgman 400 maxi-scooter for this trip, but more about the bike shortly, i kitted up and jumped on the bike early to make the most of the good weather and head to my first meeting in central London. The first part of my journey was and enjoyable blend of winding tree-lined sub-urban roads and fast paced roundabout action, i can’t overstate how much fun this kind of riding is on a maxi-scooter, any bikers that haven’t tried one of these nimble twist-and-go rockets really need have a try before passing judgement on whether it is a ‘real motorcycle’ or not! 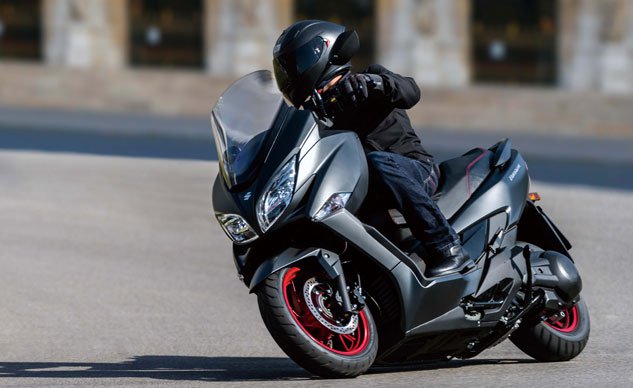 Anyway after a few miles of bliss, i joined the motorway and sat back ready for 30-odd mile stretch of straight roads, the traffic was considerably light and i settled in to a nice comfy position on the scooter, the bike would happily sit with the traffic at 80mph and the big screen gave plenty of wind protection. All the while the scooter was sipping lightly at fuel (i averaged almost 60mpg on the trip, even with some fast motorway and traffic light GP action). Once i got into central London i started to use one of the single biggest benefits to motorcyclists in the capital – the bus lanes! A lot of people are nervous about riding in a busy city centre, but to be honest i find the whole experience quite exhilarating. yes you need to have yours wits about you, there are cars, bikes, buses and cyclists coming at you from all directions, but as long as you are paying attention and checking your blind spots regularly it’s a piece of cake. I also find it good test of your reaction skills, ceasing opportunities to nip through little gaps in the traffic as they present themselves – what a thrill!

After 1hr 20 mins i arrived at my meeting location near Embankment, this saved 40 mins compared to the same journey on the train and tube, and probably well over an hour compared to taking a car! And you know what, i really enjoyed it, i got off the scooter with a big grin on my face, especially as i’d won about 90% of the drag race off the traffic lights, even putting some larger capacity motorcycles in their place in the process!

Bike parking in London is fairly easy, i found some motorcycle parking bays within a couple of blocks of my meeting location and there was a convenient Burgman sized space available. The bays also had handy ground anchors to chain my scooter too – which is an absolute must after watching countless bike theft videos in London over the last few months. Following on from the meeting my next destination was the south coast to meet some friends for dinner. As i had no sat nav and no idea of the route i decided to trust my instincts and head south west out of London and look for signs for the A3, again this was an awesome way to see some of the city’s sights as i scooted along the Thames, all of this made me realise just how much fun riding a bike is, i honestly can’t think of a better way of commuting. As well as the unbelievably low running costs, you are in control of your own vehicle and time management, you can beat all of the traffic and even park for free!

Eventually i found a sign for the A3 and exited central London past Wembley stadium, after a quick blast down the A3 and a refuelling stop (i did almost 150 miles on just over 10L!) i picked up one of my favourite biking roads in the country, the A272 from Petersfield to Winchester, the scooter handled the sweeping bends beautifully and carried a surprising amount of lean angle, the single cylinder 400cc engine punches out of the corners nicely and pulls cleanly up to the national speed limit and beyond if you want it to. Overall i had a cracking few days on the bike, which was certainly helped by the weather staying dry, but this experience really reinforced motorcycle as by far and away the best form of transport to commute on in my opinion. So next time you have the option, make sure you pick the bike over the car or train!

You can read more about the Suzuki Burgman 400 scooter here: https://bikes.suzuki.co.uk/scooter/burgman-400/