I have a very dark secret to confess, five years ago I started out my career on slopes, not on the rad invention that is the snowboard, but on the enemy device which includes twice as many pieces of wood strapped to your feet and holding two sticks in your hands! However, what an absolutely agonising week it was, I’ve never known anything as uncomfortable as ski boots in my whole life, in fact that is the reason I made the best decision of my life to switch and try snowboarding, where you can have much more comfortable footwear, and look cool as hell!

As part of my journey into the world of snowboarding I invested in my first complete set of kit after learning the basics and loving it, and part of that kit was my now beloved Thirty Two Lashed Chris Bradshaw snowboard boots. I bought the boots from The Snowboard Asylum (TSA) located in the Milton Keynes Xscape centre. I knew that Thirty Two boots had a good reputation and this particular model not only looked good but were also in the sale at the time! The boots ticked all the right boxes for me as an intermediate snowboarder looking for a pair of fairly stiff boots. 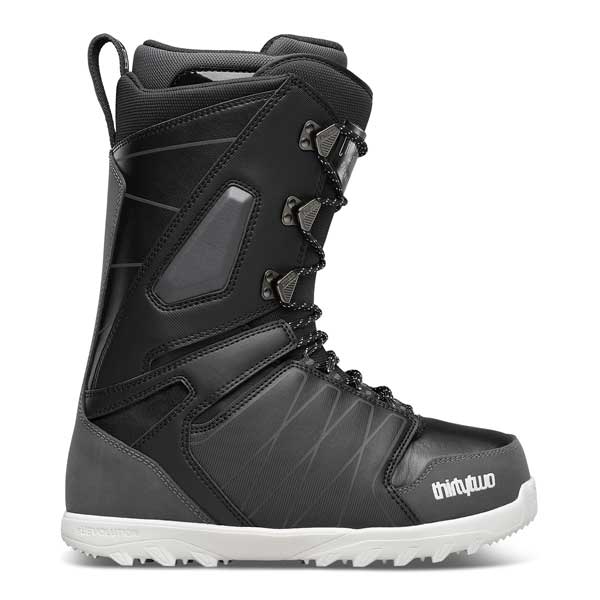 One of the many great features of these Thirty Two Lashed boots is that they come with heat mouldable linings as standard, if you haven’t heard of these then you are definitely missing out. Basically you pick the best fitting boot size (maybe slightly on the tight size) and then the shop heats up the inside of the boots and then you put them on and lace them up and the linings mould to the exact shape of your feet, pretty cool eh? In total I spent a good couple of hours bedding in the new boots, about 30 mins after they were heated up and the rest of the time at home, but my god is it worth it, these boots fit so snug you hardly realise you’re wearing them!

Testing the Thirty Two Lashed Chris Bradshaws on the piste

So after breaking in the boots around the house, the next obvious step was to get out on the mountain and see how they felt. After previously experiencing a number of overly worn rental boots the first thing I noticed about these Thirty Two Lasheds was how much support they gave, they helped me maintain a straight leg when carving at high speed without building up too much pressure.

At the same time though they were always comfortable, they didn’t cut the circulation off to my legs at all, although on day 1 I was a bit over zealous with the laces, but after loosening off slightly they were sound! I specifically went for a pair of boots with laces as I’ve had bad experiences with the boa set-up on other boots in the past, and I don’t regret that decision at all, the high quality laces are still like new even after three seasons out on the mountain.

Overall the Thirty Two Lashed Chris Bradshaw snowboard boots are comfortable, supportive, rigid enough to give support for fast carving and provide just enough flex to get away with a few laps of the park. If that sounds like something you’re looking for then you definitely won’t be disappointed with these Thirty Two Lashed boots, just make sure you spend the time with the heat moulding process and wearing them in around the house, I promise it’s worth it. Hope you found this review helpful, click the button below to find the best price for the Thirty Two Lashed Chris Bradshaw snowboard boots.